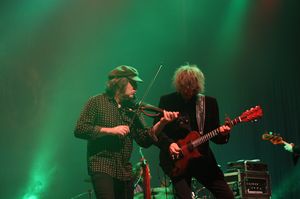 When the chance came up to see the Waterboys I thought I’d grab it with both hands as hoping to bring back memories of  the early nineties – which, incidentally were the best years of my life –would The Waterboys live up to my rose-tinted expectations? It was a big ask.  Not only was I expecting a great Concert but I was expecting them to transport me back to better times.  I was hoping they could deliver.

Mike Scott, lead singer of The Waterboys is a tall, very slim figure of a man and his soft velvety Celtic accent is sometimes indistinguishable as to whether it is Scottish or Irish.  Indeed as a Scotsman who has spent many years living in Ireland he has taken a lot of Irish influences as well as the accent with him along for the ride.

After the first song ‘Rags , Mike explains to the audience that this will be a concert of two parts.  The first half will be a plethora of well known favourites from The Waterboys back catalogue and the second half will be devoted to their new CD ‘An Appointment with Mr Yates’.  It’s not long before old favourite ‘A girl called Johnny’ is given an airing and the assembled crowd are drinking every bit of this in.  Quickly followed by ‘Glastonbury Song’ and ‘A Pan Within’ – This is already exceeding my expectations and we have barely started.

Mike halts a song prematurely to the crowds bemusement and then imparts the crows with the info that a cough sweet has just fallen onto the keys of the piano and the super efficient roadie is going out of his way to make sure that it doesn’t disrupt the performance but Mike is so amused by this that he stops playing anyway and lets out a large throaty cackle.

Long time fiddle player with the band, Steve Wickham then tells us all of a Brew-ha-ha that he has just had with a woman backstage on her  thoughts about Irish music……the atmosphere is so relaxed tonight and even though you know the story is a preamble to the inevitable  part where Steve has to show the lady the merits of Irish music by playing her a tune you are more than happy to go along with it as it gives you the chance to marvel at Steve’s fiddling prowess.

All too soon the Interval is upon us and I feel like we are being dragged away, but still want more but thankfully its only a short break and then we are back for a second half that is not only entertaining but educational as well.  The latest CD is based on the works of W B Yeats put to music.  Mike is such a wordsmith that if you were unaware of this fact then it would have been hard to distinguish the wonderful poetry of Yeats from his own lyrics.  The latest CD is not the first time that Scott has put music to Yeats words as he had already recorded ‘A Stolen Child ’  on the ‘Fisherman’s Blues’ CD.

Theatrics follow during ‘As Mad as the mist and snow’ as Steve and Keyboardist James Halliwell partake in a frenzied masked musical duel  which culminates in them being joined by Mike wearing a three-faced (and frankly quite unnervingly creepy)  mask reading the prose.

September 1913 one of Yeats more political observations  was written 100 years ago, but as Mike points out – could have been written five f*****g  seconds ago. He’s not wrong, it is as relevant today as ever before.

Now for an encore, the strains of ‘The whole of the Moon’ start up and I’m already being transported back but also contemplating that the words of this song are as Poetic as anything written by the Yeats, Keats or Wilde from the opening of “I pictured a rainbow, you held it in your hands  “ onwards the song remains as majestic now it was the first time I heard it.  It gave me goose bumps then and it still does now.  Hearing it live gives it another dimension for me and one that will stay with me for a long time.

Just when I think that’s where it ends,  a further song has passed while I’ve been in a daydream about ‘The whole of the Moon’ , and the familiar opening of ‘Fisherman’s Blues’ fills the air….Oh my!  We are left walking away from the concert not quite believing what we have witnessed.   I can’t believe I have left it so long to see The Waterboys and I vow that it won’t be long before I see them again.

Just goes to prove that if you ask for the moon (and it has to be the whole of the moon obviously) that you sometimes get the stars thrown in for good measure.